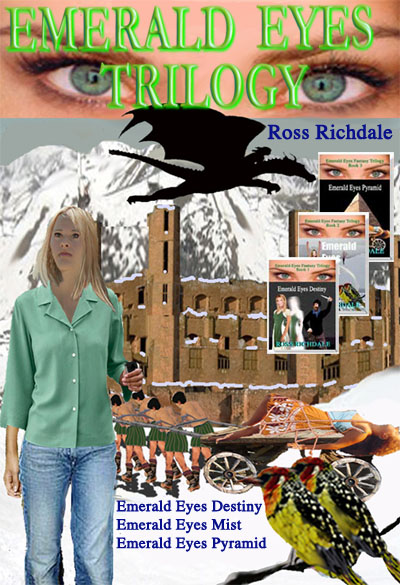 Cindy Meikin, a high school senior, has a strange experience that puts her in contact with Sylvia, a girl her own age from another world. After taking Sylvia home she discovers that her mother, Natasha and herself came from this world and not from Eastern Europe as she had always been told.

Cindy, Natasha and Sylvia return to through a void to find themselves involved in an ongoing war against foreign invaders. They meet Archwizard Lightshield, who originally knew Natasha, in a castle under siege.

Cindy also finds that she is an Emerald Eye Wizard and has strange magical powers in this new land that come to her without being called upon. The adventure continues with Cindy’s powers becoming stronger and seemingly being controlled by some unknown force.

Other characters include dwarfs helping to defend Uronia, Prince Gerard from a northern country in the same world and some dragons they seek out to help in their battles.

But why has this all happened to Cindy? What is her real connection with Sylvia and will the pair be able to drive off a ruthless enemy?

This second novel starts on the non-magical Earth. It is Christmas and Cindy and Sylvia from Emerald Eyes Destiny are skating on a lake in Washington State . A strange mist swirls in and a little bird arrives with a message on his leg asking for help. They travel through a magical void to another world and find Muftin, the bird, can speak. Gikre a dwarf, is with Tulco, a girl with emerald eyes like their own. She is caught in a bear trap set by human invaders trying to catch them.

After freeing Tulco from the trap Cindy and Sylvia help her to escape from the humans. However, they must cope with strange mists called vapin that appear to come in two forms; a white one helps them but a red one is a terrible enemy.

After being attacked by the red vapin the white vapin comes to their assistance and communicates with them with thoughts. They are told to head to White Sword Peninsular, far away up the coast.

Xentrix the dragon provides transport for this perilous journey. There they meet a strange community isolated on a small peninsular. For some reason these humanoids cannot leave the peninsular. Why is this so and what is the dark secret held by these people? What of the strange mists? Are they just a force or something alive?

In this adventure all these problems must be solved including the one about Tulco, herself. It appears that Cindy loses her magical powers as Tulco gains them. The youngster matures at a phenomenal rate to become a woman the same age as Cindy and Sylvia. Why is this so? How does this new Emerald Eye Wizard use her special powers to solve the problems in this magical world?

If you’ve read Emerald Eyes Destiny you’ll love being with Cindy and Sylvia again. This novel, though, is a complete story in itself that can be enjoyed in its own right.

She is Kondel a Pyram, a humanoid creature with wings who live inside magical pyramids. The enemy in this world are ancient human priests determined to eliminate all flying creatures from their land. Birds have already disappeared and it appears that Kondel is the last of her species left.

Cindy, Sylvia and the others set out to find the truth about the evil priests and search for Kondel’s kind. Will their magical powers be enough to overwhelm the priests who appear immortal with the ability to travel through time? And why are the tiny birds so important in this latest quest?

Remember, this is a complete story in its own right and can be read even if you have not followed the earlier Emerald Eyes adventures.

NB  There will be a break for a few days. Hope to return next week with more.