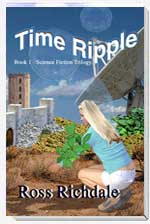 Aari can save Earth by placing it in a time ripple. However, because of the space-time phenomena it may or may not happen. If it doesn’t, Aari and her world does not exist. However she has no memory of what has, or will happen. Can cosmologist, Dr Nareen O’Grady help?

The Owens Valley was tucked in east of the Sierra Nevada mountain range and four hundred kilometers north of the teeming population of Los Angeles.  Historically, it was place from where the Los Angeles water supply came from. More recently, it became a site for radio telescopes. The CARF, Combined Astronomical Research Foundation was one of several such sites. Here, a row of radio telescopes stood. Each individual telescope could be moved along a t-shaped railroad track to focus on the same spot in the sky above. This was where Nareen and her associates made one more of the deep space discoveries that had blossomed over the last decade.

Yet, another star with a planetary system had been found in a galaxy so recently discovered that it had no name but was called only by a fifteen-digit reference number. In distance, it was twenty-five thousand light years from Earth. Even at that vast distance, the presence of planets outside the galaxy could be measured by the slight fluctuations of the star’s light as any planet orbited in front of it. Of the ten planets circling this star, one in particular proved to be of interest. It’s distance from its sun, rotation and orbit showed that it could support life similar to that on Earth.

The difference between this discovery and that by astronomers throughout the world was that the signal coming through changed after the planet’s references were saved on the computer. Unexpectedly, the array signals being received appeared to respond to their probes. Without warning the signal strength pulsed to intensity, so powerful that the recording equipment was sent into emergency overload, printed graph lines bounced off recording sheets and froze while audio static screamed and blew the receptors.

It was five in the morning and Nareen stared at her colleague, Doctor Rosetta Salazar. They had both been on duty for almost twenty-four hours and sheer lack of sleep made her wonder if she was becoming delusional when, simultaneously the computer and three backup computers all closed down. An ominous “No signal” showed yellow against the one remaining screen operating in the room.

“It’s not possible,” Rosetta muttered as she pressed various start up buttons.

For a moment, nothing happened until all the screens and other equipment came on line and pre-programmed check up procedures came into operation. Within five minutes, everything was back online except for one major problem. The radio telescopes were out of alignment with random signals being fed into the computers from nowhere out there in particular.

“Damn,” Rosetta muttered. “It’ll take us hours to get this lot sorted.”

“The light!” Nareen gasped. “The light outside!”

Normally at this time, it would be dark outside but it wasn’t. A bright light pulsed through the two tiny windows. Also, above the noise of cooling gear and other equipment she could hear a roar as if they were being buzzed by low flying military jet.

“I’m going to look,” she said and closely followed by Rosetta, ran downstairs, along corridors and outside.

Coming in an arch from over the dark silhouette of the Sierra Nevada Mountains was a comet, a fiery ball followed by a trail of white smoke. It was close and a sonic boom rattled her ears as it descended. More terrifying though was the unnatural movement made by the object. It turned in the sky and headed straight for them.

As the comet slowed, the cloud of smoke behind dissipated into darkness. Now only the security lighting and a million stars on that clear moonless night showed an oval shape that hovered above the radio telescopes.

In the frosty morning air, it appeared to be almost transparent like a gigantic bubble floating directly above them. It dropped infinitely slowly until it was only ten or so meters above the nearest radio telescope.

“Oh hell,” Nareen gasped as the bubble moved purposely away from the radio telescope dish and dropped onto clear ground nearby about twenty meters away from them.

“I’m going to look,” Nareen said. She walked across the concrete concourse and through the tussock beyond. It was dark beyond the overhead lights and she realized that the bubble that had given off its own light was now dark. Something hissed and three bubbles, like giant soap bubbles floated over her head, up into the lit area and popped into nothingness, again just like bursting bubbles.

Nareen frowned and looked around. She could see nothing in the darkness so she retreated to where Rosetta stood on the pavement.

“What is it?” Rosetta asked.

“The bubbles? I have no idea.”

“No. What it left behind? There’s something out there.”

Nareen turned and saw a red blob in a dip between the tussocks. With her heart fluttering, she walked back. The tussock around was undisturbed without any appearance of being squashed or dampened in the still dry air. There, lying face down on the ground lay a woman. She appeared Caucasian with long blonde hair and wore a formal looking dark red gown that parted in the middle to show a triangle of her back and a skirt that clung to her legs almost down to her ankles. Almost in contrast, were her exposed bare feet.

Nareen and Rosetta moved forward and knelled beside her. The stranger was unconscious but there was a pulse. She could have been a local teenager sleeping it off after a hard night at a party but wasn’t! When Nareen rolled her over, an elongated bubble floated from the girl’s mouth. It floated away and popped a few meters above their heads.

“This human was brought here in that strange craft,” Nareen whispered.

“A human from outside our galaxy?”

Rosetta stared wide-eyed at the strange girl dressed in red and nodded. “She must have caused our telescopes to malfunction,” she said. “Something here is beyond our comprehension.”