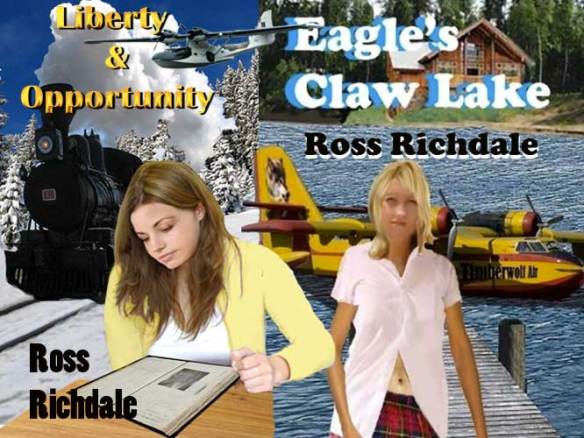 Two of our most popular real-to-life novels (Not science fiction or fantasy) are now released by our home  imprint Purrbooks. Both are available as ebooks at $US2.99 and also as paperbacks  at the two top bookstores in the world; Amazon and B&N.

Liberty & Opportunity is a family saga covering a century while Eagle’s Claw Lake is a romantic thriller.

The story begins in New Zealand when Nicole receives an ancient diary from her Canadian grandmother, Cindy that she begins to read. It begins in 1898 with Amanda’s elopement with her beloved Jack and her struggle to survive and prosper away from her domineering father in Washington State. The two begin a new life in Vancouver, Canada where, over the years, she develops a publishing empire.

Her daughter, Dorothy becomes a nurse serving in England. She falls in love with a soldier about to be charged for desertion from the trenches in the Western Front in World War 1. Will he be court-martialled and shot?

Each period in time is filled with drama, joy and sometimes tragedy, but vividly illustrates the determination of each woman to enrich her life through love of partners and families and a liberal outlook on life.

Each period has drama and sometimes tragedy, but vividly illustrates the determination of each woman to enrich her life through love of partners and families.

Eagle’s Claw Lake
Doctor Reid Tucker’s intention to spend the summer at a remote cabin at Eagle’s Claw Lake in northeast Washington State with only his dog, Cinders, never eventuates. On the trip there, pilot Kate Meltz calls in with the amphibian to a commune at the other end of the lake. While there, Reid pulls a desperate teenage girl, Lorie Somerville, from the water. This begins a frightening time as fanatical commune leader, Peter Littlejohn, tries to find Lorie and prevent her from leaving. Though he doesn’t find her on the aircraft, he sabotages it so the trio are left stranded at Reid’s cabin.

It becomes obvious that the place is more than just a remote religious commune. The girl is terrified of being caught and begs Reid to look for Jennifer and Sassy, two of her friends who have also escaped. Though pursued by Littlejohn, Lorie leads Reid and Kate to a cave where the girls are waiting.

But why has Erika Somerville, Lorie’s elder sister, returned to Eagle’s Claw Lake and found savagely beaten in the commune’s cabin cruiser?