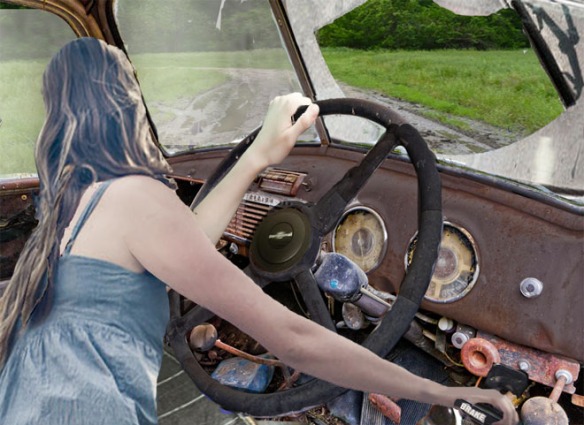 When he reached the house, Harold braked by the implement shed, jumped out and, with head down against the driving rain, ran to the Bedford truck sitting in the end bay. It was quarter loaded with hay bales covered in a massive tarpaulin ready for the evening’s feed out. This green canvas cover was attached to the cross board behind the cab, stretched up over the bales and back to the rear of the tray. Leather straps held the sides onto steel rings protruding from the side of the wooden decking. Designed to protect the hay, it could bellow up or flap in the wind but would be secure.

Harold leapt in, gave a grunt when he saw that the keys, as expected, had been left in, backed around and headed down the drive. He reached the school within moments, veered around so the Bedford was facing back towards the farm, left the motor running and tore into the senior room.

“Quick!” he cried. “There’s a slip coming. We have to evacuate the school!”

The sudden sound of a male voice made Julie glance up to see Harold’s agitated face and waving hands. She had never seen him looking so apprehensive with eyes that darted back at forth at Courtney O’Reilly, the children and finally, herself.

“The hill is about to come crashing down. I’ve got your Dad’s truck out there. Get everyone onto it.”

“Now, Doctor Bentley…” Courtney overcame the initial shock of the man’s sudden appearance and walked up to him. “It’s teeming down outside.”

“For God sake woman, if that slip hits the school you’ll be buried alive. There’s no time to argue!” Harold yelled.

Everyone in the room stopped, frightened faces studied the distraught man and a bubble of voices filled the air. A couple of the younger children shrank back at the wild man in his saturated raincoat, pointy beard and agitated mannerism.

Harold turned to Julie. “I’m not lying. If you stay here you will all be killed.”

Julie flushed white and turned to her teacher. “I believe him, Mrs. O’Reilly,” she said.

Courtney studied the man, her frightened children and the Year 8 pupil. “Okay class,” she said in a quiet voice. “Remember the emergency drills we practiced? I want you to place any thing in your hands down and line up at the door. Everyone find their partner.” She glanced up at Julie. “Could you tell Miss Taylor to …”

“Sure!” Julie replied without waiting for her teacher’s sentence to finish. She rushed into the adjacent room and up to the acting principal. “We have to evacuate the building, Miss Taylor,” she gasped. There’s a slip due to come down. Harold’s got Dad’s truck and…”

“Julie Berg!” snapped Vicky. “Don’t you dare burst in the room like that. Will you please leave and knock.”

The Year 8 girl stood looking defiant. “It’s an emergency, Miss Taylor,” she said through clenched teeth. “We have to leave. Look out the window. Mrs. O’Reilly and the seniors are already going.”

“Sit in your desks, children, ” the teacher ordered. “I shall go and talk to Mrs. O’Reilly.”

“There is no time!” screamed Julie. Her face reddened and chin shook with emotion.

But the teacher was not about to be told what to do by a pupil. “Julie,” she said in an enforced but angry whisper. “You will leave the room!”

Already two five year olds had burst into tears and Helen stared with a drained face at her sister.

“Get out!” the teacher’s voice rose an octave and she forgot to keep the volume down. “Coming in here and terrifying the children. I shall speak to your father about this.”

Julie was by now almost in tears of frustration and fear herself. “You bitch!” she muttered under her breath and ran across the room to Helen. “Come on, Helen,” she ordered. “We’re going out to Daddy’s truck.”

“You stay here, Helen.” The now openly angry teacher called out and reached out to grab Julie’s arm.

“Leave me,” Julie growled and pulled her arm away. “Come on, Helen!”

Helen’s lip quivered and dropped, huge tears appeared in her eyes as she tried to cope with conflicting emotions of obeying her teacher or going with her sister. “I can’t!” she howled. “Miss Taylor won’t let me.”

Julie stared at the steamed up windows, the irate teacher and sobbing children. She gulped and made a decision. In one frantic move, bent down, slung Helen over her shoulders and headed for the outside door. Before she could be intercepted she opened it and headed out into the driving rain.

“Put me down, Julie!” Helen screamed, kicked and punched at her big sister but to no avail.

The teacher stood dumbfounded. “How dare you!” she hissed.

Julie felt a tug on her jeans and stared down to see two wide, tear filled eyes staring up at her. Gillian McLean, who, Julie just realized had been working with Helen, had followed her out. “You can come, too Gillian,” Julie soothed. “We’ll be fine once we get to Dad’s truck.”

Without caring about Vicky Taylor, she held the still struggling Helen, grabbed Gillian’s hand and headed to the truck a few metres away. On arrival, the tall girl let Gillian’s hand go, slung open the front passenger door and almost threw Helen in.

“Stay there!” she snapped and lifted Gillian in as well.

Helen was still sobbing but nodded her head and slipped across the seat in the security of her father’s vehicle. Julie slammed the door and ran to the back tray where Harold was lifting Melanie Blackburn on board.

“I’ll go and speak to her,” Courtney replied but Harold reached out and stopped her.

“I will!” shouted Julie. “I’ve driven it around the hay field.””No,” Courtney ordered but Julie disobeyed her second teacher in almost as many minutes, ducked behind Harold and ran to the driver’s seat.

“Get in the back with the children!” Harold told Courtney and continued in a quieter voice. “Which is your car?” He nodded at the two cars parked on the muddy grass.

Courtney stared wide eye at him as if her courage had deserted her.

“Give me your keys. We can squeeze all the little ones in the cars and follow you.”

“Of course, Courtney replied. She handed a key ring to Harold. “The red Escort.”

“Right lassie,” Harold replied and lifted the teacher up under the tarpaulin with her shivering but remarkably well behaved children who squatted under the green cover with their backs against the hay bales. Overhead the rain thundered on the canvas but only remote drips leaked inside the tent shaped enclosure.

“Go Julie!” he screamed and banged the driver’s door.

Hundreds of metres above, the crack widened into a crevice and water poured out the side to further undermine the saturated soil. Thirty metres down another crack appeared and water flowed out.

But it was no trickle! A spout of filthy brown water, forced out by the pressure behind, cascaded into the air. A crack of thunder rolled across the valley but this did not come from the sky. Instead, the noise was from beneath the ground; the hillside shook worse than any earthquake and began to subside, slowly at first until more water poured into the widening gap to join that already there.

The pressure was too great! More water needed to escape and, like all natural things, took the line of least resistance… straight out! The avalanche was on its way and gathering momentum by the second.

Julie crunched into low gear, roared the motor and let out the clutch. It worked! The old truck moved forward.

“The windshield wipers!” she screamed. “They aren’t going! I can’t see.” All the time her eyes were riveted onto the rain smudged glass.

“Daddy pulls that black button out.” Helen, now over her tantrum, responded.

The smaller Berg girl reached out and pulled the old fashioned knob and the wiper, there was only one, swung down in an arc so Julie could see the road ahead.

“Thanks, Helen,” she said, and changed up to second gear. That was it, though. In the hay paddock she had never moved into a higher gear and the thought of doing so now was too scary to contemplate. Sweaty hands gripped the steering wheel and the motor screamed along in second gear.

As it worked out, this was the best gear on the slushy surface. Traction held and the heavy truck floundered forward, blue fumes belched out the side exhaust and, at the back, Courtney held the flapping tarpaulin down.

“What about the little ones, Mrs. O’Reilly?” Melanie gasped. “We shouldn’t be leaving them behind!”

“Harold will put them in the cars,” the teacher replied. “They’ll be fine.”

Her face, though was white with worry. What if what Harold said was true and there was no time! She grimaced, brushed wet hair from her forehead and gave an encouraging smile at the dozen children huddled in the semidarkness. The tray stunk of half wet hay and animal dung but was dry and they were moving.

Julie approached the ninety-degree turn into Top Oasis with trepidation. She’d never attempted a move like this and was too frightened to attempt to shift back to low gear. Even Daddy crunched it at times. She lifted her foot from the accelerator, shoved the clutch in and steered right to give her room for the left hand turn. The disengaged motor screamed, Julie swore, removed her left foot, swung the steering wheel and pushed the accelerator.

The Bedford lurched, mud squelched from the tires and the cab swayed. But the double rear wheels maintained grip on the soft gravel and the manoeuvre was completed. Ahead was the long drive and, being sheltered by trees from the sweeping rain, the truck just rumbled up. The nervous driver leaned forward, teeth bit a bottom lip in apprehension as white knuckles gripped the steering wheel but she was determined to reach the house. 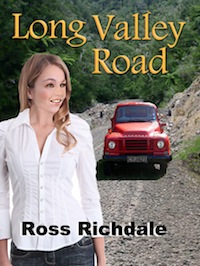