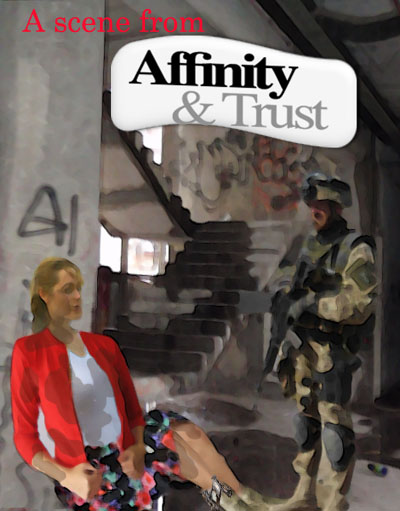 The hard-bitten soldier with months of service in peacekeeping forces at various world trouble spots, coughed at the stink of stale air and excrement as he kicked in the door of the old stone barn and glared in the gloomy interior.

“Is anyone there?” he called in the local language, grunted and was about to leave when he heard a faint cry.

He stepped in, waited for his eyes to adjust to the darkness before he saw three young women seated by a far wall. He squinted his eyes and stared again before uttering an oath of disgust. The three women were chained to the wall.

“Help us, please,” repeated the slim brown haired girl who would have been attractive if it wasn’t for her filthy dress, long tangled hair and skinny face with protruding cheekbones. On closer inspection he saw she had an ankle clamp joined to the chain that was padlocked to a bolt in the wall. The stink came from a bucket a few meters away that seemed to be the only toilet.

The man swallowed and turned to the private with him. “Get the Captain,” he snarled. “Immediately!”

While two women cringed back in terror, the one who spoke first seemed to realize the soldier could help. She even smiled, staggered to her feet and the chain, about six meters long to permit some movement, rattled.

“I am Sergeant Stefano Gabbo from the Italian unit of IFOR. We are doing a routine inspection of this village. Don’t be afraid. We are here to help.” Gabbo spoke in a halting Serbo-Croatian.

“Thank God. Thank God,” the young woman cried. “My name is Zuzana Milenkova. My friends, Kaira, Anya and myself have been held prisoner here for months.”

“Don’t trust him!” screamed one of the other women who was hardly more than a girl. “They’re just like the others.” Her screams turned into choking sobs as wide protruding eyes stared at the soldiers and she slunk back as far as the chain would allow.

The sergeant was about to reply when he heard footsteps and turned. The captain had arrived. The officer took one look at the stinking scene and the three women and gave an order. “Get them cut loose and to a hospital at once, sergeant.” He turned to Zuzana. “Captain Giovanni Ronino at your service, madam,” he said in the local language ” Do you speak Italian?”

“No,” replied Zuzana, “Only our language and English.”

“Good,” the solder replied in the later language. “I also speak English so we can communicate in, what shall I say, an easier way.” He watched as the sergeant appeared with a massive pair of wire cutters and cut the chains from the three women. “Who did this to you?”

“The local militia,” Zuzana replied as she rubbed her ankle where the clamp had come off. “A Jeljiko Wiskova is in charge.” Her eyes dropped to the floor. “A brute of a man.”

“Repeatedly,” Zuzana relied. She held her head up and looked the captain in the eyes. “We’ve been treated like animals, captain, objects to satisfy their crude desires. There were six of us. Three died and Anya,” she indicated the youngest prisoner, “is ill and needs urgent medical attention.” She gave a thin smile. “We could all do with some good food, a bath and clean clothes.”

The captain’s face was a mask but his eyes showed steel like determination. He turned and spoke in rapid Italian. “Surround the village and bring in every person from this so called militia. If anyone resists, shoot them! I don’t care a damn about the protocol.”

“Well, you heard the captain,” he snarled to his corporal. “I want the village sealed off so not even a mouse can get through and I want it done now!”

Within an hour, a dozen semi-track gun carriers had the tiny village completely sealed. Sixty protesting members of the militia were escorted into the only clear field, an antiquated and partly burned out football stadium.

“I must protest,” the leader complained. “We are in our designated territory carrying out lawful protection duties for our people.”

“Wiskova, you are under arrest for kidnapping, violent assault and rape,” Giovanni Ronino said in Italian and turned to the man next to him. “Translate lieutenant,” he ordered and stared at the militia officer.

The lieutenant saluted and spoke to Wiskova who glowered. His words were too rapid for the Italian officer to understand but the hostility and arrogant manner in which the man spoke told him everything he needed to know.

“He does not recognize your authority, captain,” the lieutenant said, “and demands we to be released immediately.”

“Does he?” Ronino glowered at Wiskova and turned back to the lieutenant. “Fair enough. Tell him he can go but his men stay.” He nodded to an alleyway under the grandstand. Our men are to have their weapons armed and ready but will allow him through.”

Wiskova glowered when he heard the translation, stared at the captain, shrugged and headed towards the grandstand. When he reached the alleyway, four Italian soldiers stood aside with weapons lowered.

He walked into the dim corridor and stopped. “What the hell!” he swore in his own language as three thin woman appeared in front of him, each armed with a military automatic pistol.

Their faces were devoid of emotion but all three pistols were held level and aimed directly at the man.

“You will never rape or torture my friends or myself again, Captain Wiskova,” Zuzana stated in an ice-cold voice.

“You wouldn’t dare,” the man replied with the tone of authority still there. “You haven’t the guts to…”

“Oh no!” Kaira hissed. She squeezed the trigger.

The sound of the weapon was surprisingly quiet and was easily supplanted by a scream as the man staggered back while he attempted to clutch at his chest. The other two weapons fired, the man screamed again and his body jerked in different directions as shot after shot pounded into his body before it slumped back in a puddle of blood.

Out in the stadium, Captain Giovanni Ronino stared at the militia members and turned to his assistant. “Tell them there’s been an unfortunate accident lieutenant. Some local girls were playing with weapons and they accidentally went off.” His voice turned hard. “Also, tell the second in command here, they have one hour to bring me everyone responsible for the raping and torture of those three girls. If it is not done, they’ll all be lined up by the far wall and the girls’ families invited into do, what shall we call it, some questioning of their own? I’m sure when they see how these women were treated their methods will not be as civilized as ours.”