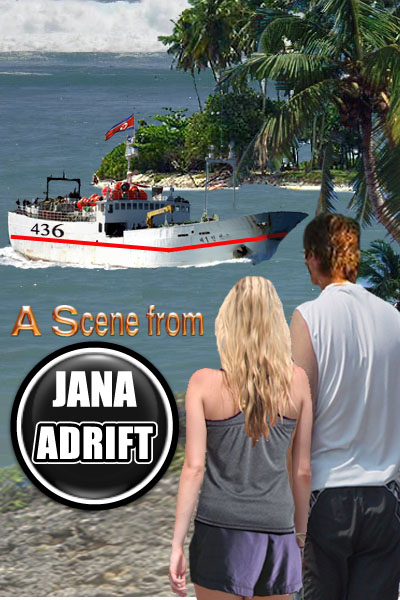 Will they be rescued or is their fate turning to the worse?

Darkness had just dropped over the island when a puffing Kelsie burst into the cabin. Her knees were bleeding and dirt covered her limbs.

“Quick!” she screamed. “We were at the lookout watching the sunset when…”

“Whoa, slow down,” Rowan cut in. “Take a deep breath and just tell us, Kelsie.”

“There’s a boat going past. Hank’s wants me to get those distress flares in the emergency kit. We’ve only got smoke ones up there. Now it’s dark we’ll need the skyrockets.”

Within seconds, Rowan had found the flares while Jana picked up their two flashlights. The four tore out and met Hank coming in the opposite direction. He also looked excited.

He stood there heaving with perspiration bubbles across his forehead. “I lit our fire,” he puffed. “We need the flares, though. Did you find them?”

“Yes,” Rowan said and showed the container to Hank. “You just pull the tab to ignite them. Do you want me to go ahead?”

Rowan nodded and began to run but his speed was easily matched by Jana.  “It’s better to head for the beach,” he puffed “Let’s go through the gap.”

Their flashlight beam bounced off rocks and trees as they ran. Rowan grabbed Jana’s hand so they could support each other over the uneven surface. Soon the sound of breakers ahead filled their senses and a moment later they saw the line of white surf against the purple sky. Stars had not yet begun to twinkle. Then they saw orange light flickering on their left.

Rowan stopped and held took a flare out of the container. “Ready?” he whispered.

He sat it in the ground and pulled the tab. They stepped back and waited. There was a hiss rather than a report and the red flare arched across the sky. It burst onto a shower of light and lit the area up like a red morning.

They reached the shore and saw it; a black silhouette beyond the waves with a line of white cabin lights as well as the usual navigation lights,

“Oh my God,” Rowan cried and swept Jana into his arms. He kissed her and they watched the boat until the flare light faded.

A small flare burst up from the boat.

The others arrived and stood with their arms around each other just staring out to sea long after both flares died.

“The boat’s turning,” Hank said. “I belief it’s heading around the eastern end of the island. They must know about the entrance into the lagoon?”

“Will they come in?” Kelsie screamed.

“It’s not a big boat,” Hank said. “There should be plenty of room if they want to enter.”

“Its not that warship that took the terrorists off the Konstellation is it, dear?” Denise said.

“No. It’s smaller and a different shape.” Hank said. “I checked that out.”

“It was still daylight,” Kelsie shouted. “I glanced out and there it was.”

A blue flare flew up from the boat. Rowan touched Hank’s arm.

“Is there any significance in the colour?” he asked.

“I’ve no idea,” Hank said. “It could mean standby or something. I doubt if they’ll risk coming into the lagoon in the darkness. We’ll fire a second flare”

This one also lit up the whole sky for a few moments and Jana could see the ship. It certainly looked like an ocean fishing boat with high masts and a small spinning radar screen above the bridge, She tried to read the writing on its bow but their flare faded and they were plunged back into darkness.

“They know we’re here,” Rowan said. “We might as well head back to our side.”

It took half an hour to get back to the lagoon and along the beach to the entrance.  The undergrowth petered out at the coral at the end of the island, which was now mere meters wide. Out beyond the breakers the lights of the boat showed in the darkness. It appeared to be anchored.

Again the heavens were lit up for several moments and again there was a blue flare fired in reply.

Nobody except Kelsie wanted to return to the cabin. When questioned she screwed her nose up. “We need to pack everything up.”

“I’ll stay and keep watch,” Rowan said. “You all go back. If anything happens I’ll come and tell you.”

“Right,” Hank said. “The rest of us will get back. If anything important happens fire one of those smaller flares, Rowan. If we see it we’ll come running.”

Rowan and Jana held hands and watched their friends disappear until only their flashlight bobbing along the beach was visible. Later a faint flicker showed in the cabin windows.

She turned. The boat was still there, a line of portholes and square bridge lights, rising and falling in the swell.

The pair sat with their arms around each other. The stars came out above and later a crescent moon poked over the horizon. One by one the lights in the boat went out until only the square cabin lights and the navigation lights showed. Jana leaned against Rowan. He tucked his arm around her and squeezed her tight.

“We’ve been here twenty nine days,” he said. “You know if the Konstellation was still afloat we’d be off Australia by now.”

“Just one boat in a month,” Jana replied. “If it went by heaven knows how much longer we’d have to wait.” She squeezed Rowan’s hand.  “I feel so strange. It’s as if this isn’t real.”

“I know,” Rowan said. “My feelings are all muddled, too.”

They lapsed into silence until Jana felt her eyelids grow heavy and she fell asleep.

She woke several times during the night and it seemed morning would never arrive. Finally, she awoke to see the sky was red and the boat still there bobbing in a slight swell. The sound of footsteps made her glance back along the beach. Hank was approaching.

“Denise sent me with your breakfast,” he said when he arrived and set a basket on the ground. “She was up before dawn and used our last flour to make some cookies. They’re still hot.”

“She’s one great lady,” Rowan said and fixed Hank with a stare.

“She is,” Hank replied. “I guess she deserved someone better than me.”

Jana looked up. “No Hank, you’re fine. Without you we would not have survived. I’m sure of that.”

“We had our moments,” Hank said. “But we came through it all okay.”

“We did,” Rowan said in a whisper.

Jana grabbed his hand. “The boat’s moving,” she said. “It’s coming in!”

They watched boat turn and head in. Someone aboard returned Jana’s wave.

Five minutes later it was through the heads and chugging by them. It looked quite crisp and clean with a gray hull and dull red line along the hull.

“Korean characters,” Rowan said when he saw the writing on the superstructure.

“Not only that but look at the flag at the stern.” Hank sounded serious.

Jana studied the flag waving in the breeze. It showed two narrow blue strips between a wide red interior stripe. In the centre, a white circle enclosed a red star.

“I don’t know it?” Jana said. “I thought the Korean flag was white with a red and blue circle in the middle.”

Hank nodded. “You’re right, Jana,” he said. “But that’s South Korea. The flag we’re looking at is communist North Korea, one of the rogue states our president doesn’t like.”