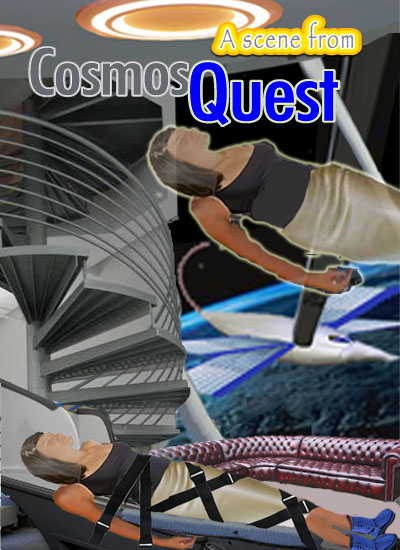 After an initial euphoria of experiencing entering infinity drive, Sophie began to slip into a lethargic state as her eyelids became heavy. She still hovered above her body but felt herself being pulled back into it. It appeared that the others were already asleep.

“I heard you but how can I when I’m aboard Zarel 8 and not Dawn Rescue?” Sophie could not hear her own voice but breathed a sigh of relief when the computer replied.

“Space and distance has no meaning at this speed. There is an emergency…”

Sophie listened with increasing concern at Mu’s report; thought about trying to awaken Jack for help but decided the action asked for could only be invoked by herself.

“But I have to physically return to Dawn Rescue to activate it?”

Sophie immediately found a problem. When she went to undo the, harness her hand went right through the clip.  “Help me, Mu!”

“At this speed we are traveling faster than the electronic impulses in your brain operate. To do anything physical such as undoing the clip you need to use a different section of your brain.”

‘How!” Sophie felt panic in her throat.

“Use your unconscious memory. Do this as an automatic action rather than trying to think about it.”

Sophie stared down at her hand and did what Mu suggested. On her third attempt when she was really worrying about failure, her fingers pulled the clamp and she found herself floating straight up to the ceiling. Oh hell, what if she went through it! She kicked, spun her arms and again thought back to the last time she was in a weightless environment. She found a wall strap, held it and pulled herself vertical but still floated half a meter above the floor.

“You could have told me that the gravity was switched off.”

“I have no access to the alien computer and did not know. I shall take your situation into account when you travel back through the space station.”

“Is the life support operating there?”

“Oxygen level is normal and the temperature is 20º Celsius with 40% humidity.”

“So now I think back to how I moved in a weightless situation last time?”

“Yes. Information I have found show that a pipe runs along the ceiling of the middle floor for this very purpose. When you get to it, pull yourself along.”

As she thought back Sophie found that that she began to feel normal rather than detached from her body. Also the room around her now appeared solid rather than semi-transparent. She pulled herself to the airlock and stopped. No matter how she tried she could not get the door open. Of course, she had never done it on this ship before. Every other time she had gone through, it was already open or Jack had done it for her. You can’t remember doing something if you never did it in the first place!

“Mu,” she hissed and explained her situation.

“Revert to the present and move though it!”

“Revert to the present and move though it!”

Sophie cursed the stupid computer and changed her word. “Explain!”

“So I remember what it was like when we first entered infinity drive?”

“No. Don’t use your memory. Use your natural conscious state.”

Sophie gulped but by trying not to think, found herself again floating above her body. She looked ahead; saw what looked like a curtain of millions of beads. As she moved into them they floated away like bobbing corks in a swimming pool and she found herself in the space station. Using a similar method, she floated through the floor into the middle section before sheer exhaustion brought her back into her body. Her heart raced and perspiration floated off her face and the ball of her back.

“Breathe slowly and relax,” Mu said. “You can now use your memory again to physically pull yourself through the space station.”

Sophie didn’t bother replying. Instead she pulled herself up by using wall handholds, seized the pipe and found it was easy to float along to the far end of the space station. Here she saw an opened airlock door.

“I overrode their system,” Mu reported. “Come up to the Dawn Rescue bridge.”

With everything now under Mu’s control, it was easy to float through and up to the familiar bridge.

“Your handprint is necessary to allow me to turn on the infinity drive engine.”

“Will it react with one being used in Zarel 8?”

“No. They have different technology.”

“And what happens if I remain here?”

“You will travel with the Dawn Rescue. My assumption was that you would wish to remain with your companions.”

“After infinity drive is started the Dawn Rescue need not be moved until after you have left. Suggestion.”

“You go to the observation deck on the space station and strap yourself in a seat. From there you will be able to see out into deep space and ascertain whether our actions were successful or not.”

Sophie floated across to the main console, found the touch pad but forgot to think back. “Damn,” she cursed as her hand went though the pad. When she switched her thoughts it worked.

“Infinity drive has been started,” Mu said a moment later. “The Dawn Rescue will detach from the space station in ten Earth minutes. Once that has happened all contact from myself shall cease.”

“Thank you. Mu.” Sophie whispered and floated out of the Earth starship for the last time. She made her way into the space station observation deck, found a suitable chair on the lawn and jumped in fright!

“Don’t do it to us,” a trembling Penny shouted.

Sophie turned and saw her friend pulling herself down an adjacent wall.

Penny floated into another chair and also strapped herself in. “I saw you leave Zarel 8. When you never returned I managed to awaken the others and we all came looking for you.”

“Who do you mean by the others?”

“Our original group… Jack, Kyla, Daz and Foxin. They’re all searching through the space station for you.” She was obviously distressed with wide eyes and trembling lips. “I thought you were dead!”

“I thought you would do something suicidal to save the rest of us, The fighters are following and when we drop out of infinity drive, they’ll be there too, won’t they?”

“Yes, they are following and I guess the only suicidal action will be by Mu.”

“We can only watch and hope,” Sophie replied. “Mu thinks the action I took should work.”

Penny frowned. _”I hope so. I have no feelings at all. I’m just numb inside.” She glanced up. _”No… relief at finding you safe at the moment.”

Sophie smiled. It was good to have Penny with her.

Even in infinity drive Sophie could recognize the six Zarel fighters, like distant slugs about two centimeters long, flying in formation parallel to them. They were identical in shape but smaller in size to the ones she knew. Also, two ugly bulges on the underside of each fighter that probably carried weapons replaced the solar panels. The fighters appeared to be contented to remain beside them. However, they were still far closer than the thousand kilometers deemed to be the danger zone.

She glanced at her watch. Nine minutes had slipped by. “Hang on, Penny. One minute. Damn, I wish we had a closer view.”

Immediately the scene outside zoomed in and the blurry background froze. There was a slight wobble and the Dawn Rescue appeared outsidewith two retro-rockets burning. It curved around beside them and tipped over so the underside was facing them. Heat waves vibrated out of four central exhaust pipes and it accelerated away so quickly that within a moment it had gone.  The space station shook and appeared to slow before it dissolved around them.

Penny screamed and Sophie waited for her life to be sucked from her. It didn’t happen! The space station shimmered back into view and the feeling of motion stopped.

“I think we were caught in Dawn Rescue’s slip stream but our own drive was powerful enough to counter-react it,” Sophie said.

Outside, not only the Dawn Rescue but also everything else had gone.

“Zarel 8 and the drones! How did that happen?” Penny asked.

“They must gave been linked by tractor beams that we hadn’t accounted for,” Sophie gasped as she stared out into the empty blur of infinity drive. The shock of losing the five thousand humans in suspended animation began to register. “It’s my fault, Penny,” she whispered. “I’m responsible for the deaths of five thousand humans.”

“No, it is more probable that you saved them.”

“How?” Sophie felt anger as well as guilt.

“Look out the windows behind you.”

The six fighters were flying in formation on the other side of the space station.

“An electronic surveillance probe is scanning our vessel,” their spaced station computer announced in the Cye language. “It has been successfully blocked.”

“How?” Sophie asked in the same language,

“The readings returned show that this station devoid of living creatures. The intruders will believe that you humans and our remaining benefactors are aboard the Dawn Rescue or Zarel 8.”

“Will they be able to override those readings?”

“It is possible but the scan has stopped,” their computer replied. “They do not appear to be interested in examining us further.”

Sophie watched, still with a pounding heart as one fighter circled over them again before it returned to the formation. The six craft hovered beside them for a moment before they sort of quivered and vanished.

“We did it!” Penny gasped. “They’ve dropped out of infinity drive. By now they’ll be thousands of kilometers behind us.”

“That is correct. The benefactor fighters were not built for long-range flights at post-light speed. It is a logical conclusion that they have return to their home base,” the computer replied.