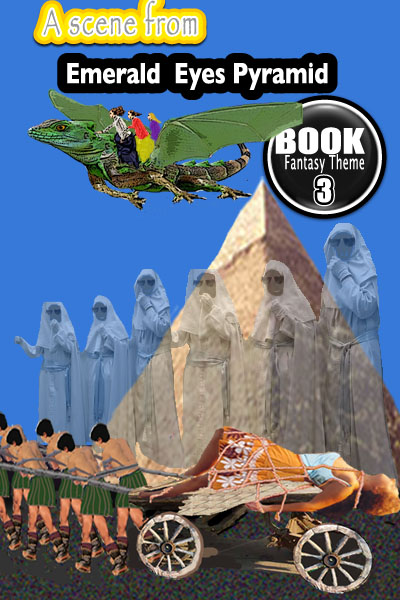 Sylvia  saw a stack of wood at the front of the pyramid.

“I don’t like the warriors’ shields,” Xentrix the dragon muttered. “That poor wee mite is about to be the victim in some pagan ceremony, the sacrificial virgin perhaps. See the funeral pyre?”

Sylvia nodded. “We can’t see much, Xentrix. You need to fly lower.”

“If we can see them, they’ll be able to see us,” the dragon replied. “Is that what Cindy wants?”

“Yes,” Cindy shouted. “Get down there, Xentrix but don’t land. Circle at a safe height”

“I was hoping you’d say that,” Xentrix rumbled. He dipped his left wing and started a long downward slide.

On the ground below, a massive military or religious ceremony was in progress. Warriors dressed with armored jackets, curved helmets and yellow kilts surrounded the pyramid. To Cindy they looked a little like Scottish clansmen except that the helmets were more like those of Roman centurions. Every man carried a circular shield and sword.

“Look at the other lines,” Sylvia said. “They’re dressed like priests.”

Men in white robes stood shoulder to shoulder to form two lines that stretched from the outer circle to the pyre. A four-wheeled wagon, pulled by bare-backed slaves, edged forward up a narrow gap between the lines.

“They’re slaves all right,” muttered Xentrix. “See the guards walking beside them?”

“Someone’s tied on it,” Tulco cut in. “I saw something move.”

Cindy switched her attention to the wagon. A woman was tied on the top, face up. Her arms and legs were stretched beside it and bound with heavy rope. She wore a light blue top, orange skirt and had long flaxen hair and a face that twisted back and forth. All other movement was restrained by the bindings.

“Well, she’s not human,” Xentrix rumbled. He leveled off about the height of the top of the pyramid and flew in a lazy circle.

“He’s right,” Cindy added. “That girl has a set of wings beneath her body.”

Almost as if she’d heard them, the girl below wriggled her body to expose a set of silver wings.

Cindy stopped talking and felt a sensation in her body she had not felt for years. She’d lost her magical power when they’d first met Tulco all those months before but now it was back.  It seemed to flow up from her fingertips and toes up her elbows and knees and on to her body and neck. When it reached her mind, the voice came with it.

“Whoever you are, great flying maidens. Help me, please!” the voice screamed. “I’m about to be sacrificed and burned alive.  I am not evil as the priests preach.  If you can fly you must know…”

The voice cut off as quickly as it started.

The girl with wings had been stuck by a guard and lay unconscious on the chariot. A line of red blood trickled out the side of her mouth.

“Xentrix,” she screamed and kicked his leathery skin with both her heels. “Get her!”