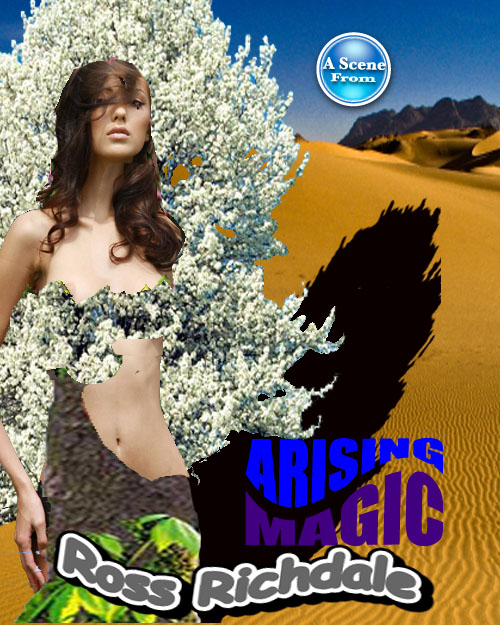 Kyla staggered in the searing heat and wiped wet sand from her face. “Sliver,” she whispered. “It won’t work.”

Slither turned and glanced back. The pair were in a bad state and Jaythen was little better. For the last three hours he had set a killer pace. They had walked down into the next valley where there was morning shade but it had gone now that the sun had reached its zenith. Beneath them the sand was too hot to touch and everybody suffered from acute sunburn.

“Jaythen,” Sliver said. “My energy is almost depleted. Can you help provide our friends with nourishment?”

“Just think of a tree that’ll help and you will become it.”

“We’ll need pine needles for protection.” Sliver glanced at the sky. “The wind will soon rise. Spawn from the south could blow in and there is no guarantee that they won’t now take root and grow.” He turned to Shane. “We’re stopping and you’ll be able to bring Kyla into our shade.”

“No,” Kyla muttered. “I’ll be fine. A mouthful of water and…” She staggered again and collapsed face first into a mound of sand.

Shane rushed over and grabbed her. “Sliver,” he cried. “She’s unconscious. Do something!”

“I will, lad,” Slither said. “You watch over Kyla and Whoosh. Jaythen and I will do the rest.”

“And if something comes?”

“Awaken me by squeezing my trunk.”

Sliver smiled and turned immediately into a towering pine that shed needles around the others.

“My turn,” Jaythen whispered. She bent down and felt Kyla’s forehead. “Once she is in shade and has more liquid she’ll be fine, Shane. ”

“We’ve only half a canteen of water left,” Shane replied.

“I’ll help,” Jaythen replied and moved away from the pine that now shaded them. Shane held Kyla and stared as she lifted her arms and changed into a tree. She smiled and held a hand across her exposed body while her transmogrification continued.  This time she became a different tree, a gigantic pear tree in full blossom. In seconds though, the blossoms turned to buds, leaves sprouted and fruit grew. Dozens of pears the size of Shane’s hand covered the tree.

He reached up and grabbed one. It was ripe and juicy. “Thank you, Jaythen,” he whispered and knelt down beside Kyla.

She fluttered her eyes and gazed up.

“Here suck on this,” Shane said and held a pear he’d bitten into out for her.

Kyla coughed and sat up. She saw the pear above her and broke into a smile. “Jaythen?” she asked.

Shane frowned. “Why do you say that?”

“The pears. I doubt if she could produce them without Sliver’s help.”

“The birds and the bees, Shane.”

Kyla shrugged. “Could be,” she said. She sucked on the pear. “How’s everything else?”

“Whoosh was asleep on Slither’s shoulder. I guess he’s still with him. It’s hot but at least we now have shade. This bright sunlight should help both Jaythen and Slither recover.”

Kyla screwed her nose up. “I guess not. It’s just at times like this…”

She took a bite from her pear and gazed out at the desert scene. In all directions the sand dunes shimmered in the heat but to the south she saw afar-off line of green. Kyla noticed movement to the north as if sand was blowing through the haze.

“The wind’s coming up,” Shane said. “I hope that’s not an incoming sand storm. That’s the last thing we need.”