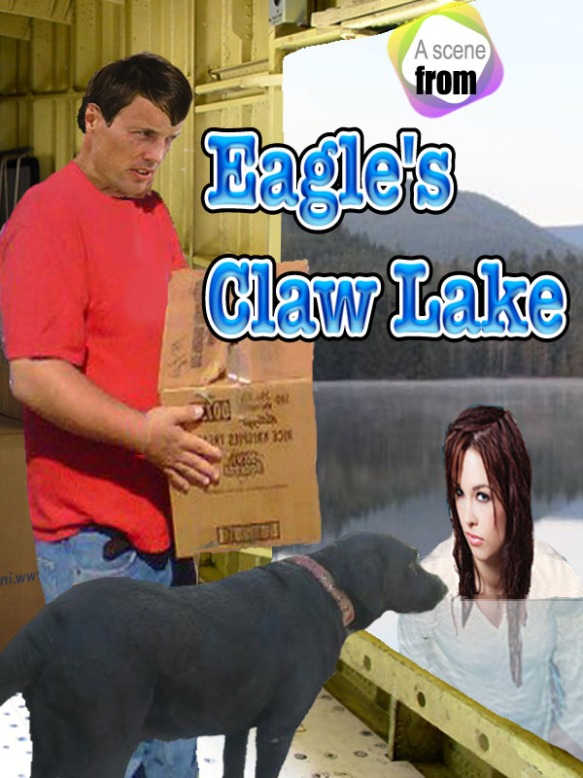 “Help me, please!” quivered a voice.

Two enormous blue eyes stared up at him from the water. A tanned face, long wet blonde hair and full lips were those of a young woman, hardly more than a girl. She clasped a small handle below the hatch and appeared to be having difficulty treading water.

“Your other hand!” Reid said, grabbed the frozen hand and yanked the surprisingly heavy girl up.

She came out, fully clothed in clinging blouse and skirt, and managed to get a bare foot on the bulkhead and propel herself inside. For a second she lay down gasping and shivering before she turned and gazed at the cargo door and jetty beyond.

“They mustn’t find me,” she cried. “If I’m found I’ll be thrashed or worse. I can’t…” A rush of tears replaced her words.

Reid nodded grimly. He searched around for something to help, spied Kate’s coveralls and wrapped them, like a towel, around the girl’s shaking shoulders. Her lips were shivering from cold and her eyes looked anxious.

“Your name young lady?” Reid asked as he slammed the hatch down and stepped across to shut the other door. Somehow it seemed safer with the view of the jetty shut out.

“Okay Lorie,” Reid replied. “You are safe with me. Nobody will hurt you.”

“They will,” the girl cried. ” They’ll forcibly remove me and even a big guy like you can’t stop four or five of them.”

“And you risked a beating and freezing water to swim out here?” Reid replied.

The girl nodded miserably with her eyes downcast. It was as if her courage had evaporated.

“Okay, so we hide you,” Reid replied in a soft voice.

He searched around. The interior was half filled with his gear and the boxes he’d just loaded. With a few heaves he pulled the boxes forward so there was a gap in front of the rear wall. “Get in there, Lorie,” he said.

She nodded, sprung into action and within seconds was squatting behind the cargo. Reid shifted it back but grimaced. It was an obvious place to search but what else could he do?

“Cinders,” he gasped and opened the dog’s cage door.

Cinders bounded out all licks and wagging tail.

The brown eyes stared up and the Black Labrador sat on her back haunches in front of the cargo. The tail stopped wagging and remained straight out behind her. Nobody would touch a thing unless she was called her off. Cinders was a pet but also an excellent guard dog who had been trained with military precision.

They were only just in time.  Without even a knock, the jetty door swung open and three men walked in. “We need to search the plane,” the old guy who had originally spoken to Reid said. He glared around. “Why is the floor wet?” he hissed.

Reid, though, was not intimidated. “Can I help?” he asked.

“One of our flock is missing,” the same man replied.

“So why would he come here?” Reid snapped purposely using the wrong gender.

“Your visit is too much of a coincidence. This girl is a highly neurotic girl. She can not survive on her own.”

“So she’s gone for a walk along the shore or to the back of your farm? I have not seen her.”

The man glowered and stepped towards the boxes. However, a low growl interrupted his intentions.

“I wouldn’t,” Reid snapped. “Cinders there is protecting my gear.”

“Call it off,” the man ordered but stopped as Cinders rose and growled again.

“You are on my employer’s airplane,” Reid stated in a cold voice. “This is our property, not your land. I respected your customs on the jetty. Here, you can respect mine. I have not seen your missing girl. She is not here. Surely if she had come to look over the plane, your man would have seen her.” He glowered at the second man who had, he now realized, been watching the plane since their arrival.” As for the wet floor, I opened the door and got some water for Cinders to drink.”  Reid then decided to bluff and gave a casual shrug. “However, if you wish to move all the boxes, I’ll give you a hand.” His eyes held the older man’s gaze.

For a moment the cold stares held before the man spoke again. “And you never saw a young woman in our uniform on the shoreline or outside the fence?” he asked.

Reid never flinched. “Only the group watching us unload,” he said, “They were all behind your gate.”

“Perhaps I was wrong then,” The man turned to the other two who returned from inspecting the cockpit. “Joseph, go and search the barn; Jacob, the shoreline.”

“Right, Peter,” both men replied. Reid was sure there was a sadistic gleam in their eyes as they departed.

Peter turned to Reid and now sounded almost friendly. “If you see her, please tell us,” he said and held out his hand. “As I said, she is a highly disturbed young woman half way through her treatment. To stop at this stage could be very detrimental to her health.”

“Sure,” Reid replied as he gripped the hand.