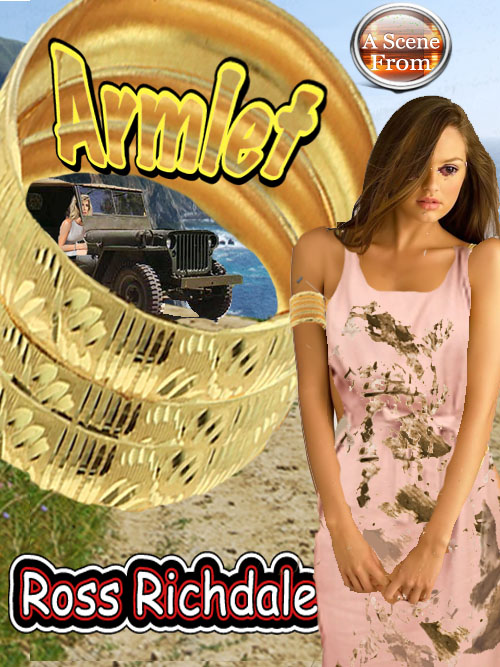 The jeep came to another tight bend and Kolina concentrated on her driving. After an hour and thirty kilometres they were now on a less windy section away from the plains and ocean views. Grasslands with beef cattle and sheep roamed around. There were, though, no farmhouses or people. This deserted land in a strange way gave Kolina more confidence as it was more what she expected.

That was until they saw the girl!

They drove around a bend and there she was standing in the middle of the road. Kolina pulled to the right and screeched to a stop to avoid hitting her. In the same instant she noticed everything about the stranger.

The girl was little more than a child and wore a long tatty dress.  Kolina gulped when she looked up. The girl’s face was covered in perspiration and tearstains made dirty lines down a sunburned face. The eyes staring at her were like saucers and showed apprehension, if not terror.

“See the bruises on her arm?” Sofia whispered. “We can’t just leave her, Kolina.”

“Just keep an eye up and down the road.”

“It could be a set up. Suppose there are two men hiding somewhere ready to jump out and hijack the jeep. Wars bring the worse out of people.”

“Okay,” Sofia replied. She looked around in all directions. They were beside an open area of fields with no obvious places for anybody to hide. “I can’t see anybody but I’ll keep looking,” she said

Kolina watched the girl who just stood in the middle of the road with her head down. Long unkempt hair covered her face. It was as if all the strength had gone from the slim body. She drove the jeep a few metres until she was beside her, wound the window down and put her head out.  Her right arm stretched out to hold the top of the steering wheel. She only wore her tank top and the armlet shone on her bare arm.

The girl looked up with new tears dripping off her cheeks.  She moved her eyes and saw Kolina’s armlet. “Lily was right,” she gasped. “She said you would be coming along in this strange car. I wanted to believe her but after all this time…” Her body shuddered and words turned to sobs.

Sofia jumped out and ran around to the girl. She placed an arm around her and jerked back in surprise.

“What is it?” Kolina’s senses were on full alert.

“I felt it,” Sofia said and placed her arm back around the trembling girl. “It’s okay. We’re your kind. We’ll help you.”

Sofia kept one arm around the girl, looked up and grinned. “She’s wearing an armlet just like ours.”

“Natalie. My name is Natalie Pfter.”

The girl sat in the jeep between Kolina and Sofia and wiped away tears. Her eyes had changed from despair to hope after she saw their armlets. “I’ve never, ever seen anyone with a lily,” she whispered.

“The gold thingy around your arm. Do yours talk to you?”

Kolina nodded and switched her attention to Sofia. “We’d better get going,” she said and raised her eyebrows as if to ask her to find out what you can.

“Yes,” Sofia said to the girl. “Kolina’s armlet is called Eboff and mine is Slave.”

“I thought I was the only one,” Natalie whispered. “Lily searched and searched but it was only this morning that she told me you had arrived and I had to get up here before you left again.”

“And where are you from, Natalie?” Kolina asked.

“Gavhamn. It’s a small fishing port down in the bay.”

“This road must go that way. We’ll take you home,” Kolina said.

Fear turned to Natalie’s eyes. “No,” she burst out. “Please don’t. If I go back they’ll kill me.”

“Have the Basonians have taken over?” Sofia asked.

Natalie frowned. “I don’t know that name,” she whispered.

“Won’t your parents be worried about you?” Kolina asked.

“I have no parents,” Natalie sobbed. “I come from the Gavhamn Orphanage for Young Ladies. It’s… it’s…” She burst into tears again.  “I can’t go back. Never! Lily said you were my only hope.”

Natalie shook her head. “Lily tried but the lines are engaged and Lily can’t get through.”

Kolina frowned. “What do you mean, Natalie?”

“Lily said it’s like a telephone. She knows your thingy is there but it’s doing something else and won’t answer her call. Right now she can only talk to me.”

“So what does Lily say?” Sofia asked.

“She said to trust you and ask you to trust me. I don’t understand the rest.”

The girl went into thought before she replied. “Something about a Time, Space Transference Dimension. Can you understand that?”

“It must be something to do with what Eboff last told us.”

“Lily said you wouldn’t understand but that it didn’t matter. She also said you need me as much as I need you. It sounds silly doesn’t it?”

“No, I think it fits in with other things that have happened,” Kolina said. She glanced across at Natalie. The girl was quite tall with blonde hair and the maturing body of an early teenager. “How old are you, Natalie?” she added.

“Don’t know. We weren’t allowed to talk about that sort of stuff. Birthdays were banned.”

“I sneaked a look in the register once and know when I was born, though.”

“Did you now?” Sofia said. “We can work out your age from that. Are you any good at math, Natalie?”

“We only have arithmetic at school.”

“Nine hundred and twenty three on our new calendar.”

Kolina stared at Sofia who looked shocked. “Are you sure?”

“Yes.” Natalie counted on her fingers. “That’ll make me twelve or thirteen, wouldn’t it?”

“And what year is this, Natalie?”

Natalie gave a tiny chuckle. “I may be a cry baby but I’m not silly.”

“You aren’t either of those things, Natalie,” Kolina said. “We’re the ones who are confused.”

“It is New Calendar Year 946.” Natalie glanced at Kolina. “Do you still use the old calendar?”

“Something like that,” Kolina whispered and caught Sofia’s eyes.

The present year was 1005, fifty-nine years after the date Natalie gave them.