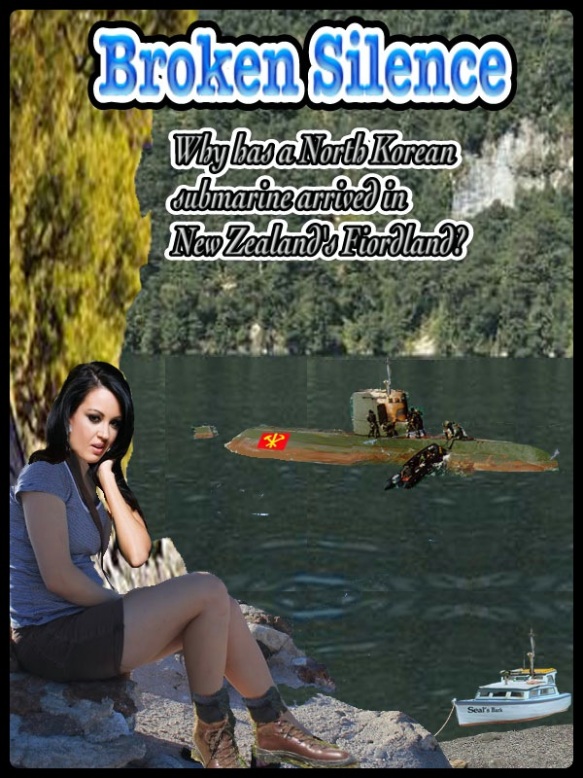 “Creep forward and have a look,” Troy whispered. “If you all go to my left there’s a small rock outcrop to stay behind.”

Kim manipulated herself between two tree trunks, reached out, pushed a clump of spiky grass aside and gasped. Below them was their cove  but it was the submarine that had surfaced in the centre of the cove that caught her attention.

The central conning tower was already manned with the outline of several officers standing there.

Kim  said nothing as she continued to study the submarine. A forward hatch opened and a line of sailors  rushed out in a line. Within seconds a sinister looking machine gun was  clamped to a turret and swung around to face them. More sailors appeared and a flag unfurled above the conning tower. It had two blue stripes at the top and bottom between a wider red middle stripe that contained a white circle surrounding one red star.

“And they were waiting for us,” Kim replied. “But how could they know we were coming?”

“More radio bugs placed in your home, car or school. They could have been monitoring your conversations for weeks.” Roger grimaced. “It took us three weeks to organise our trip here, plenty of time for the submarine to travel here from somewhere out in the Pacific.”

“They’re known to support terrorist organisations,” Roger said. “Come on we aren’t out of danger yet. I think we’re well hidden but if they have heat seeking equipment…”

Kim felt a cold chill crawl through her body. Everything was happening too quickly!

Kim walked several metres and out of the trees to find the waterfall tumbling down a series of rocks ahead. Her heart lurched for, though the falling water was only a metre across, the exposed area was six or seven metres wide with damp rocks covering the exposed part. Probably after heavy rain the water would covered the entire width. They were above the base of the fall with the water tumbling into a deep pool ten metres below them. Kim turned her head to look upwards. The  crest of the waterfall was twenty metres or more high but it wasn’t one sheer drop. There were really three separate waterfalls, each tumbling down a rock face into a small pool that overflowed  into the next drop before the final drop  that was across  from where they were standing The terrain looked like four gigantic steps punctured by smaller outcrops of rock.

Kim studied their surroundings. The cliff they were leaning against, had the waterfall on one side but opened out into a bush covered valley on the other. She turned. Below them was the cove with the Seal’s Bark floating by the shore, the submarine anchored further out and  twenty or more sailors moving around. A rubber dinghy was  bobbing in the surf behind their boat and at least three men were aboard. The kayaks were pulled up on the sand nearby with one sailor guarding them. The noise of the waterfall drowned out any sound but  there appeared to be some sort of argument going on between the occupants of a group standing on the beach.

One man was stabbing the air with a finger while three others stood with hands on their hips. Suddenly, the first man broke away and began walking up the beach. Another held out his arm, there was a puff of smoke, the guy staggered and collapsed on the sand.

“Did you see that?” Roger gasped. “They up and shot the bastard.”

Kim gulped. He was right! The three walked up to the man on the sand. The guy with the gun sort of kicked his downed companion and walked away. The other two stood there a moment before they also turned and walked back up the beach. Tiny waves surrounded the man and Kim was sure the only movement was made by the surf rocking him.

“Nice types,” Troy muttered. “If they do that to their friends, what would they have done to us?”

“Or still will if they catch us,” Janine’s face appeared gaunt as she stared down at the scene below.